As marketers, we often talk about building relationships with influencers. Sometimes, though, it makes more sense to connect with the people in the middle. They’re usually pretty persuasive to their small followings, but they just haven’t hit “major influencer” status yet. Here’s a walkthrough of how you can use FollowerWonk and BuzzStream to find and reach them, using a real-life example, a campaign from our recent ebook launch. When we launched the Advanced Guide to Content Promotion last month, I created a tiered outreach strategy to promote it, heavily focusing on “emerging influencers” and “niche experts.” Together with some paid amplification efforts, that strategy helped us earn thousands of views and hundreds of shares. I relied heavily on FollowerWonk and BuzzStream to do it.

Just like we recommend in the book, I began by identifying and prioritizing target audiences. Getting in front of (and helping) “Forward-Thinking Link Builders” was my primary goal.

Creating the top tier prospect list was easy. I know our industry pretty well and could easily list twenty heavy-hitting SEO super influencers (and, lucky for me, BuzzStream already had a relationship with most of them).

But the bulk of my list needed to be what I call “emerging influencers” and “niche experts.” These aren’t the superstar CEOs, but the people who are a few years into their career. They’re beginning to develop specialities and personal brands. Some of them might be managers, others not, but they’re all still pretty close to the daily work of content promotion, link building, strategy, and outreach.

I cared most about these guys, because they’d be the ones who would find the most value in our guide. (It was written with them in mind.) They’re also the ones who can be very persuasive inside organizations and on teams. I did hope they’d read and Tweet the guide, but, really, I wanted them to read it, learn from it, and share it with their coworkers and bosses.

Using tactics similar to what Richard Baxter shared in his 2013 MozCon presentation (this is sort of like what he did, but reverse) and lessons my teammate Matt Gratt learned with targeted Twitter advertising, I decided to use FollowerWonk to build our list of emerging influencers and niche experts. We started with influencers and used FollowerWonk to find their audiences.

First, I brainstormed groups of two highly specialized experts for various disciplines (e.g., Paddy Moogan and Jon Cooper for link building; Adria Saracino and Kelsey Libert for content and outreach). I was familiar enough with the industry to do this without the help of any tools, but had it been a new industry, I would have turned to BuzzSumo.

I loaded each duo and the @BuzzStream twitter handle into FollowerWonk to get a list of people following the three accounts.

It was important to me that I only selected people who were already following @BuzzStream, because it meant I could be confident they were at least somewhat aware of us and had, in a sense, opted in to hearing what we have to say. We focused on the people who followed all three accounts.

I always chose to pull the triple-overlap group. (If you follow Paddy Moogan AND Jon Cooper AND BuzzStream, you’re probably quite interested in link building.) And, in some cases, I pulled groups that followed only one of the influencers and BuzzStream.

I created a bunch of Excel reports in FollowerWonk and downloaded them all.

I combined all of the documents and then removed duplicates (there were a lot.) Next, I sorted by follower count. A lot of the superstar CEO influencers floated to the top of the list, and I deleted them out, since they’d already been accounted for elsewhere. I also deleted anyone who had less than 150 followers.

Using Excel’s filters, I got rid of inactive accounts by excluding people whose most recent tweet was earlier than Jan 2014 and people who had tweeted less than 100 times. To address spam accounts, I only included people who had a follower number greater than the number of people they were following.

Basically, I whittled down my list until it had about 100 people, which was a reasonable amount of outreach for the time I had allotted.

BuzzStream for Outreach and Followups

I saved my doc as a .csv and uploaded it to BuzzStream (Note: I was working in the People section of BuzzStream, not the Website section.) BuzzStream automatically matched FollowerWonk fields to contact records.

I tested a few different outreach templates and personalized them pretty heavily. Since I’m an active member of the community I was reaching out to, it was easy for me to bring up personal connections. I could mention conferences we’d both attended, stuff they’ve written that I liked, friends we had in common, etc. The template that performed the best was personalized, fairly short, and featured a friendly request for a share.

Response to the guide was very positive. Lots of people shared on Twitter and a bunch let me know that they’d also shared with their teams internally. We got a lot of views, and — with the exception of a small list of things we’d do differently next time — we deemed the project a success.

The outreach has proven successful in other ways, too. So far, it’s led to people pinging us when they have content of their own that our audience might like, a delicious coffee meeting that involved insightful conversation about the industry and our work, and a bunch of shoutouts in presentations and blog posts.

Getting linked to or written about on huge sites is great, but sometimes smaller niche blogs make more sense for your business. Going after the mid-level influencers and niche experts can drive the right views from the right people (and great links, too).

How do you create prospect lists? Where do you go to find influencers? Leave a comment below or talk to us on Twitter. 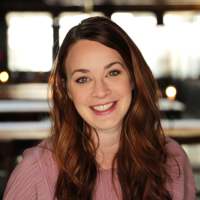 Stephanie Beadell manages PR & Marketing at Briggsby. She has a master's degree in market research, which she leverages to bring data-driven thinking to SEO and Digital PR.